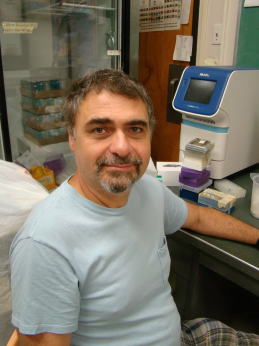 My primary scientific interests include different aspects of microbial ecology and applied microbiology. The primary focus of my applied microbiology research is on the development of biofuels (biodiesel, methane and hydrogen gas) producers. To achieve this goal, we work with individual microorganisms and microbial communities, with a particular emphasis on fermentative anaerobes.  In order to understand the dynamics of these communities, we use an array of microbial ecology methods such as 16S rRNA gene library analysis, real-time PCR, metagenomcs and metatranscriptomics. Other microbial ecology projects in my laboratory are focused on the understanding of the role of microorganisms in the biogeochemistry of aquatic sediments and diseases of aquatic animals. To address this issues, my students and I use both cultivation-dependent (enrichment and pure cultures) and cultivation-independent (16S rDNA libraries/metagenomic/metatransciptomis) techniques.

Biodiesel production using cheap feeding stocks such as plant biomass hydrolysates is the primary project in my laboratory. We are developing a community of microorganisms capable of utilizing all hydrolysate components – glucose, xylose and even lignin. A recent project, funded by the NASA, is focused on molecular hydrogen and methane production on Mars through utilization of human wastes. Both projects have been conducted in a close collaboration with the Chemical Engineering Department of our University, which substantially increases the chances for the development of commercially viable technologies. The role of microorganisms in the coupling of the carbon and sulfur cycles at oxic-anoxic interfaces is the major microbial ecology project in my laboratory. Originally, my research was focused on two distinctive marine environments: the Cariaco Basin, the world's second largest permanently anoxic basin and mobile tropical deltaic muds characterized by physically reworked layers dominated by suboxic processes. However, now I am planning to continue the research only on mobile sediments, which are a much larger and more globally important, yet poorly understood, system. Environmental metagenomics is a new direction for microbial ecology, bacterial genomics and me. Its goal is to characterize genomes of environmentally important yet non-culturable bacteria, elucidate what genes are expressed in any given environmental condition and investigate how the flow of nutrients between the members of the community takes place. Metagenomics data will demonstrate a full metabolic potential of microorganisms in question and indicate their possible involvement in biogeochemical processes in their environment.
Graduate student projects are expected to be framed in agreement with the general directions of the research in my laboratory. Although the work of a microbiologist is generally in the laboratory, those students who are interested in microbial ecology will be going to the field for collection of samples. Students interested in applied microbiology will work in close collaboration with students and faculty of the Chemical Engineering Department. Financial support of research projects may be available under my research grants. Graduate students are expected to publish project results in peer-reviewed journals and present data at professional conferences.

Chistoserdov’s laboratory is currently seeking a Ph.D. level student (Research Assistant) to work on the NASA funded project “Production of Fuels and Other Life Support Products Using Wastewaters as a Feed into a Space-Based Biochemical Conversion System (BIOSYS)”. The project is conducted in collaboration with the Department of Chemical Engineering. The student is expected to isolate and/or genetically engineer anaerobic microorganisms or consortia capable of increased production of molecular hydrogen and methane, which will be used by astronauts on Mars as a fuel. Applicants are encouraged to apply to the Biology Department Ph.D. program for the January 2019 admission deadline, however, later applications will also be considered. The NASA grant covers both tuition and stipend.