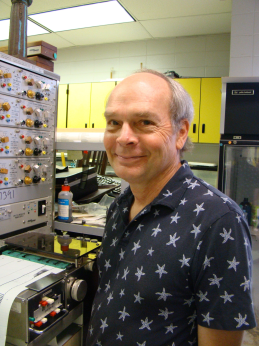 My laboratory studies the physiology of freshwater, estuarine, and marine invertebrates. One current research project centers on the physiology and endocrinology of ion and water balance in brackish water invertebrates. This work involves studies of cellular volume regulation, epithelial permeability to water and ions, and hormones involved in salt and water balance. The physiology and pharmacology of invertebrate muscles is also an area of current research interest. The molluscan heart, like mammalian hearts, is myogenic.  The cardiac output of the heart in molluscs is controlled by a variety of neurotransmitters and neuropeptides.  The effects of these agents varies widely among species of bivalves and gastropods.  For example, the hearts of some bivalves are excited by the neurotransmitter 5-hydroxytryptamine and inhibited by acetylcholine; in other species, the effects of these two neuroeffectors is reversed.  This suggests that there are a variety of types of cardiac receptors in molluscs; the goal of this research is to explore and catalog these receptors.  Apple snails (genus Pomacea) are notorious as invasive species that have damaged both natural ecosystems and crop harvests around the world.  The lab has recently initiated studies of the physiology of the apple snail, Pomacea maculata, which has invaded Louisiana and the Gulf South.  The animals are aquatic, with a gill, but also have a modified mantle that allows them to breathe air; the lung is also employed as a flotation device.  The lab is investigating the respiratory, excretory, and metabolic physiology of these snails.  Louisiana offers access to a wide variety of aquatic habitats, each with a unique, highly adapted fauna. The goal of this laboratory is to enhance our understanding of the physiological mechanisms necessary for existence in fresh water, the sea, and the zone where these two media mix.

Mueck, K., Deaton, L., and Lee, A. 2017.  Respiratory physiology and heart rate of the apple snail Pomacea maculata (Perry 1810) in water and during short or long term exposure to air.  Comp. Biochem. Physiol. A (submitted).